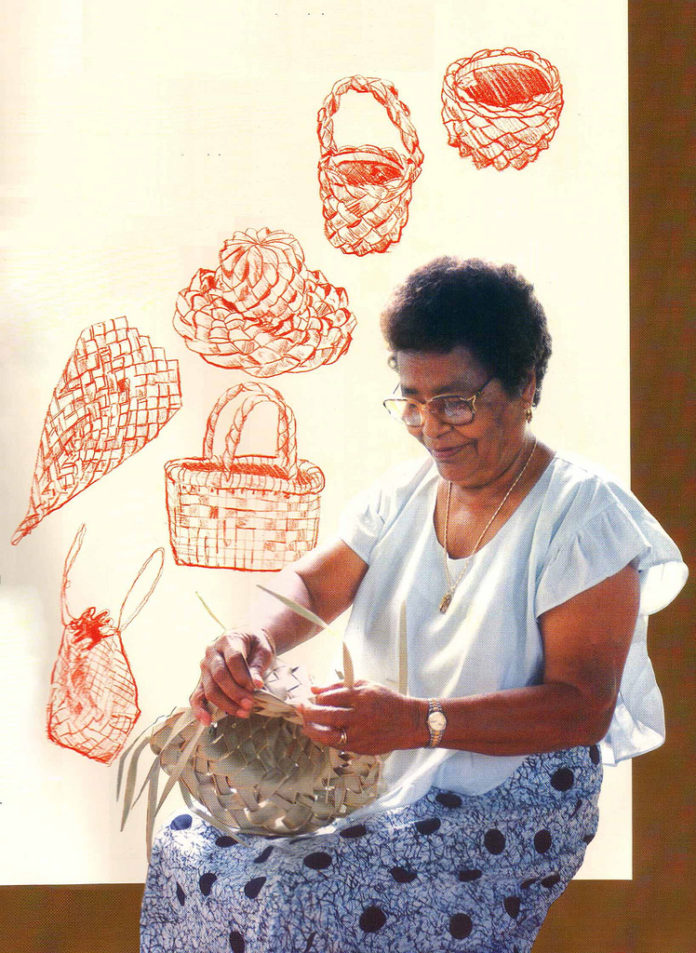 Weaving continues to be an important practice on Guam. For thousands of years Chamorros have used Guam’s abundant foliage to produce useful and unique items. Although the art of weaving is not as prevalent on Guam today as it has been in days gone by, or as critical for everyday life, it is still seen as one of the lasting artistries of Chamorro culture. 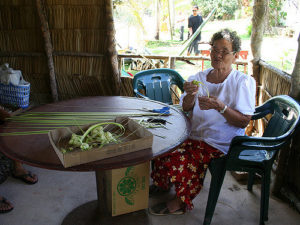 The pandanus plant (Pandanus tectorius) is native to Guam and provides fibrous leaves that are good for weaving. The wide leaves grow low to the ground, making them easy to reach by women collecting weaving materials. 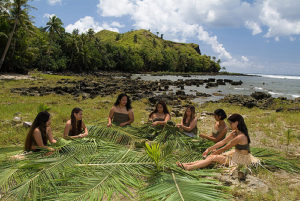 The pandanus leaf is typically prepared by cutting it from the plant and by using a si’i, a small cutting tool, to remove the hard, sharp thorns along the edge of the leaf. After the thorns are removed, the leaves are boiled and scraped with a shell before being dried in the sun. The dried leaves are rolled up and kept inside for a few days. Finally the leaves are left out in the sun for weeks where they are cured and readied for use. Before using the cured pandanus leaf for weaving, the weaver would drag a shell-tool across the surface of the leaf to make it more pliable.

Sturdier leaves from the coconut or nipa palm, were used for roof thatching on traditional Chamorro huts. Nipa thatch was preferable because it lasted roughly five years compared to coconut thatch’s two-year lifespan. Nipa and pandanus leaves can last up to eight years as thatching over bamboo slats.

When preparing leaves for thatching the fronds are typically collected in the drier months. Dry season falls in the beginning of the calendar year on Guam. Once harvested, the fronds are split down the middle. The two spines are then placed on top of one another and the leaves are woven using diagonal plaiting to make a piece of thatch. The pieces are tied together and dried before being placed on the roof of the home.

Although many woven items have been replaced with modern manufactured items in contemporary Guam, weavers continue to produce mats, bags, novelty items and decorative pieces that are either used locally or sold to tourists.

One of the most popular areas on Guam to watch and learn weaving is at Gef Pa’go, Inajaran, a cultural demonstration center in Southern Guam. Gef Pa’go employs several master weavers who demonstrate the art to students, tourists and interested residents. The Gef Pago cultural village area also has a small gift shop featuring woven creations by the masters employed there. The gift shop sells small woven animals, fish and utilitarian pieces created out of dried palm leaves.

Many of the masters working at Gef Pa’go and around the island learned to weave from family members or others living in their village when woven items were crucial to everyday life. The tradition was not encouraged by the Japanese during the occupation of World War II but resurfaced after the liberation of Guam in 1944.

In recent years, however, weaving is increasingly being seen as more of a cultural reminder and decorative art rather than an essential practice for everyday life. Weavers continue to make decorative items for local parties, fiestas, gatherings or displays. Decorations typically include hanging pieces, table centerpieces, palms woven in a vertical manner to create a divider are often seen.

Weavers are also beginning to transform the practice into more of an art medium. For example, woven leaves are now being used as a medium for sculpting.

Guam Council on the Arts and Humanities Agency. A Journey with the Masters of Chamorro Tradition. Hagåtña: CAHA, 2000.