Bencharong ceramics are enamelled terracotta ware originating in China in the mid-fifteenth century during the Ming dynasty. The Chinese tradition employed at least three colours to create designs. In Thailand, ceramic makers prefer five colours, namely white, yellow, black, red and green (indigo), resulting in the name “bencharong”, meaning five colours. Though bencharong ceramics were made in China, their designs were Thai and Thai craftsmen would travel to China to oversee their production, starting from the reigns of King Prasat Thong and King Narai in the Ayutthaya period. These ceramics were made in Jingdezhen, Fujian and Guangdong, China. The bencharong from Jingdezhen was often made for the royal court because of its fine, vitreous clay and great skills in creating beautiful designs.

The ordering of bencharong and multi-coloured gilded ceramics from China continued from the Ayutthaya to Thonburi and Bangkok periods, with development of new designs, for use by royalty only. During the reign of King Rama V, bencharong ceramics were made for the first time in Thailand, using the kiln of Krom Phra Ratchawang Bowon Wichaichan. The designs were made by royal craftsmen. King Rama V also allowed bencharong to be the private property of rich merchants. Today, bencharong remains very famous and is exported to many countries in Europe and Asia, bringing both fame and revenue to the country.

The main features of bencharong are their fine, clear designs that mix gold with other colours. Today, the shapes and designs have been further developed and bencharong now features more than 30 colours. Some of the well-known motifs include kanok (a flame-like motif), phum khao bin (lotus bud shape), deities paying respect (thep phanom), norasing (half-man half- lion) as well as those inspired by flowers, animals and the story of Ramayana. Bencharong ceramics are used as home decorations by both Thais and foreigners and as beautiful, luxurious gifts for special occasions like weddings.

Tea cup and saucer, painted by Bencharong technique. Some pieces are gold painted which is a contemporary technique adapted by several ceramic artists for a more luxurious decoration. 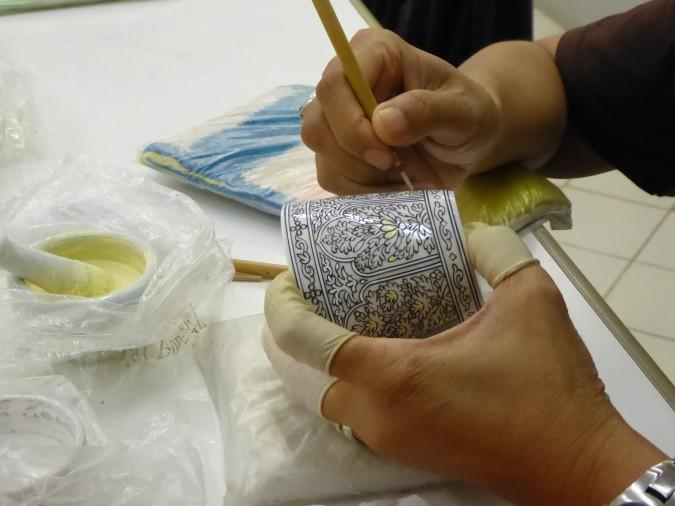 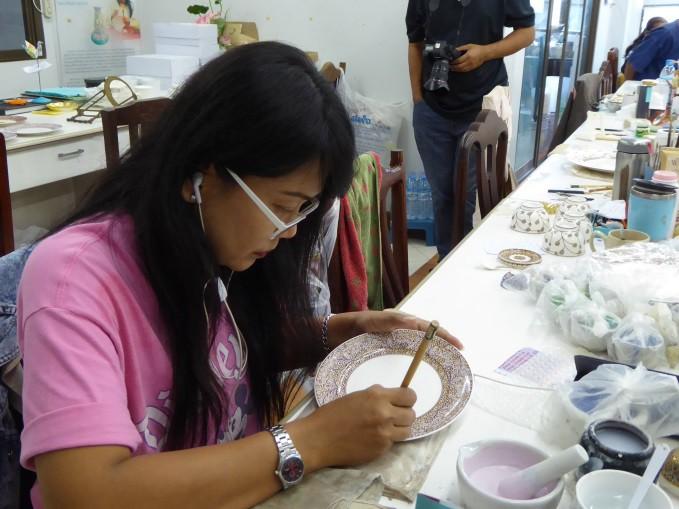 The painters working at Pinsuwan Bencharong, one of the well-known workshops of Bencharong in Samutsongkram Province