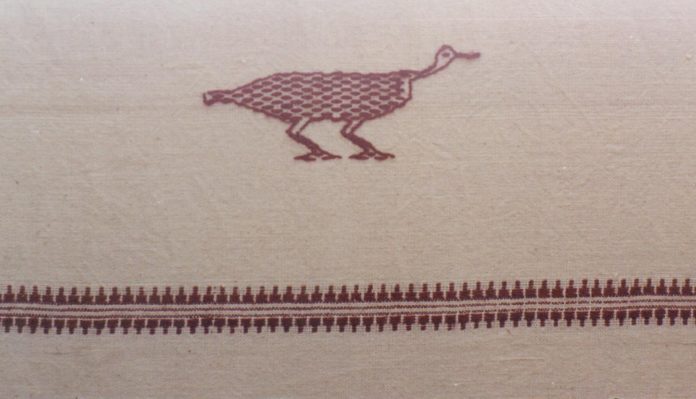 Fragments of woven madder-dyed cotton excavated at the Indus Valley site dating to the third century BCE provide evidence of an advanced knowledge of weaving and dying technology on the sub-continent. Over the millennia,, weavers served the ceremonial needs of courts and the requirements of the everyday. The traditions of handloom weaving can be found across India. They are sWeaving is sustained by oral transmission and on the job learning, passed on over generations. T. The pata weave is one such distinctive tradition. It is based in the remote village of Kotpad, located on the border of the eastern state of Odisha. 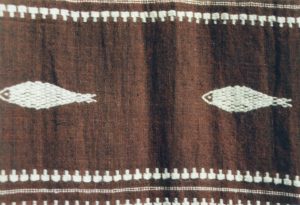 Woven by members of the Panika community,, the pata weave is the conventional wear of the Dhruva and Muria tribes of the region. The heavy, thick, handspun cotton is characterised by its patterning in natural-dyed shades ranging, from deep-red to dark-brown. The unstitched and uncut patas are woven in differing sizes to suit the customary sartorial needs of their tribal clientele. This includes the lugada sari-like dress for women, tuvaals and angocchas. For men, it includes , the men’s shoulder and head cloth, shawls, dhotis andand phenta (turbans). 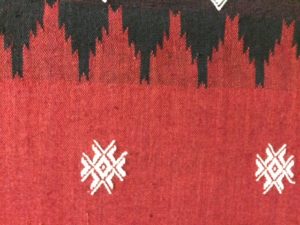 The women of the Panika community are the master dyers. Extracting the dye from the root of the aaal plant (Indian mulberry, morinda tinctoria) and getting the dye-pot takes at least a fortnight. Both the aaal dyed and unbleached yarn are then set on the throw-shuttle treadle pit loom for weaving. The minimalistic motifs range from figurative representations of animistic beliefs and the natural world, to everyday objects of desire and human forms.

With cheaper synthetic clothing available,, the patronage of the Dhruva and Muria tribes is now limited to celebratory times. In an effort to stem the decline,, the eighteen remaining weaving households in Kotpad have successfully explored new markets and expanded their repertoire.